KIMBERLY CARMODY
​A visual artist and art educator, Kimberly Carmody has been making art and teaching for over twenty years. She grew up in Brattleboro, Vermont and began taking art classes at age eight at The River Gallery School with artist, Ric Campman, who was her mentor until his death in 2006. She studied ceramics and painting at The Evergreen State College in Washington State and in 1994 Kimberly moved to New York City to attend The New York Studio School. While there, she deepened her ability to see- by drawing, painting and sculpting from the human figure. In 2001 Kimberly volunteered at IMBALI Visual Literacy Project in Johannesburg, South Africa, and facilitated students in making a mural representing their township. There she conducted research for her Masters thesis that investigated the role of art and art education in post-apartheid South Africa. She then earned a Masters in Art Education from Teachers College at Columbia University. Since 2001 Kimberly has taught visual art to students of all ages and abilities in both public and independent schools, hospitals and homeless shelters, inspiring her students to cultivate their imagination and creativity. She has been selling and showing artwork in and around New York City for two decades.

Moved by the inaccessibility of art in underserved areas of New York City, Kimberly founded Urban River Arts, a community based non-profit, in her neighborhood of Crown Heights Brooklyn in 2009. By 2010 she was facilitating large scale interactive art installations inspired by Tibetan Sand Mandalas at a range of museums and galleries including, The Asia Society, The Rubin Museum of Art, The Brooklyn Botanic Garden, The Michael C. Carolos Museum in Atlanta GA, and Four Eleven Studio in Provincetown, MA.

​Over the years, Kimberly has developed a dynamic practice in which teaching and making art inform one another. She currently teaches visual art to Pre-K through eighth graders at The High Meadow School in Stone Ridge, NY. Kimberly's current studio practice is inspired by the upstate community and landscape, Her most recent series includes low-fire sculptural pieces that are abstract vessels, forms and slabs inspired by her own body and humanity. Their origins stem from the archetypal elements of earth, water, fire and air. 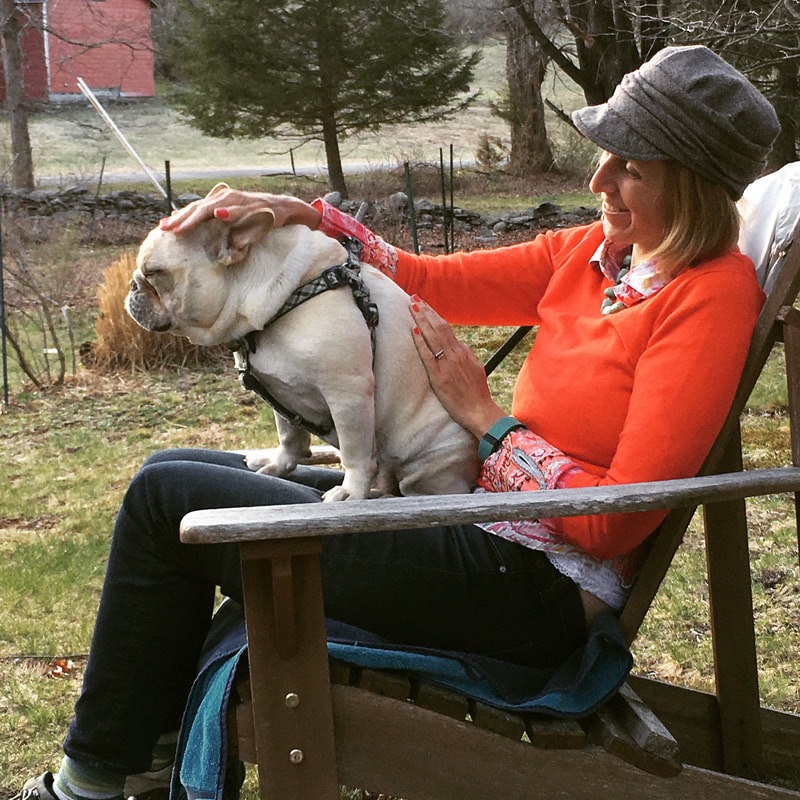 Kimberly with her French Bulldog, Preston, in Accord, New York.